On Saturday November 18 2017 the first meeting for the Pittsburgh chapter of the Society of St. John Chrysostom was held at the Byzantine Catholic Seminary on Pittsburgh’s northside.

Founded in London, UK in 1926, the Society of Saint John Chrysostom has three main areas of mission:

Pittsburgh has a great diversity of Eastern Christian Churches both Orthodox and Catholic along side a vibrate and varied set of ethnic Roman Catholic communities. This should form a strong foundation for building a strong SSJC chapter in the Greater Pittsburgh area.

The SS Cyril and Methodius Seminary was kind enough to supply the venue for this first meeting which opened with a moleben to the Holy Spirit in English in the seminary chapel. The readings from the Byzantine lectionary for Pentecost reminded us of that call to proclaim that comes with the descent of the Holy Spirit. 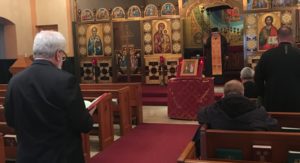 Moving from the chapel to the seminary’s Smart Classroom, the featured speaker was Deacon Jack Figel, the national President of the SSJC in the USA and founder of the Orientale Lumen Foundation that creates and sponsors the annual conference highlighting the state and issues in Orthodox / Catholic dialog.

Deacon Jack reviewed the history of the SSJC expansion from the UK into the USA and the formation of the Orientale Lumen Conferences that are now a key feature of the national SSJC regular program. He showed a video of prominent members of various orthodox and catholic jurisdictions praising the work of the society in advancing Orthodox/Catholic dialog. And gave a history of the contacts and statements from hierarchs all over the world on the societies activities. 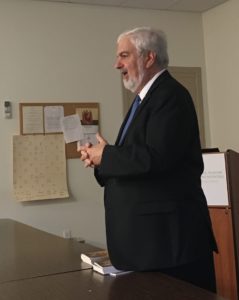 We also heard from the most active SSJC chapter in the world in Youngstown Ohio. They reviewed how events are conducted in their chapter. The events generally move around to a hosting parish or institution. And open with a non-eurcharistic prayer service in the tradition of the hosting parish. Which is then followed by a featured presentation and business meeting. Both the Youngstown and southern California chapters collect local dues to pay for expenses and speaker stipends. SSJC Youngstown has also moved forward with creating a formal bylaws and executive committee.

Planning has begun for a spring meeting with one pastor potentially volunteering the venue. We are still exploring speaker and topic options. Free free to email suggestions or volunteer to help with planning the next event for the Spring of 2018.